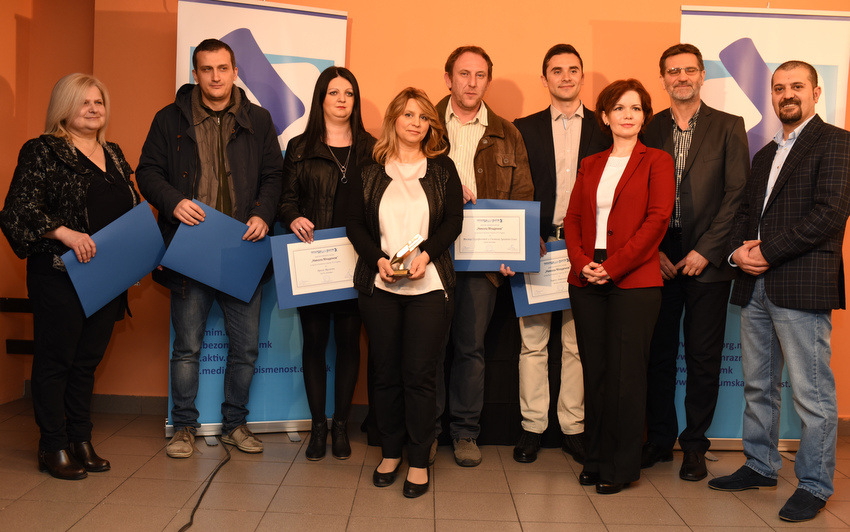 Miomir Serafinovic and Snezana Lupevska-Sozen won the first place on the MIM’ contest for the journalism award “Nikola Mladenov” for the best investigative story for 2016. The wining story, aired in the TV programme “KOD” on Telma TV, investigates the circumstances of the mysterious death of Kosta Krpac, one of the witnesses of the Special Prosecution and also one of many who were granted amnesty and abolition by the President. The story revealed details and moments related with the tragic event, which later were confirmed in the investigation that lasts by this moment, although the Public Prosecution assessed that it was a suicide.

The second award was bestowed to Zoran Jovanoski for the video story “The ashes of death” aired in the TV show “360 degrees” on Alsat-M TV. The story reveals the terrifying health consequences of the people and of the environment caused by the work of the power plant “Oslomej”, in time when the country announces that it is going to continue the work of the plant.

Irena Mulacka, journalist in the weekly “Fokus” was awarded with the third prize on the contest, for the serial of texts which reveal frightening data for the death of 80 newborns at the Skopje Clinic for Gynecology in just six months.

This year, the jury decided to give a recognition for distinguished journalistic engagement to the journalists Vlado Apostolov for the stories “Dots on the tender for cleaning the Government”, “How did the yellow building grew-up in neoclassic castle”, “Voters live in Sveti Nikole, but have addresses in Skopje” and the serial “ The estate of Vladimir Zdravev”, all published on the web-portal “Prizma”, as well to Stojanka Mitreska for the story “The mushroom factory got moldy earlier”, also published on “Prizma”.

The MIM’ awards for the best investigative story of the year has been awarding since 2001, as part of the efforts for promotion of professional journalism and democratic values in the country.