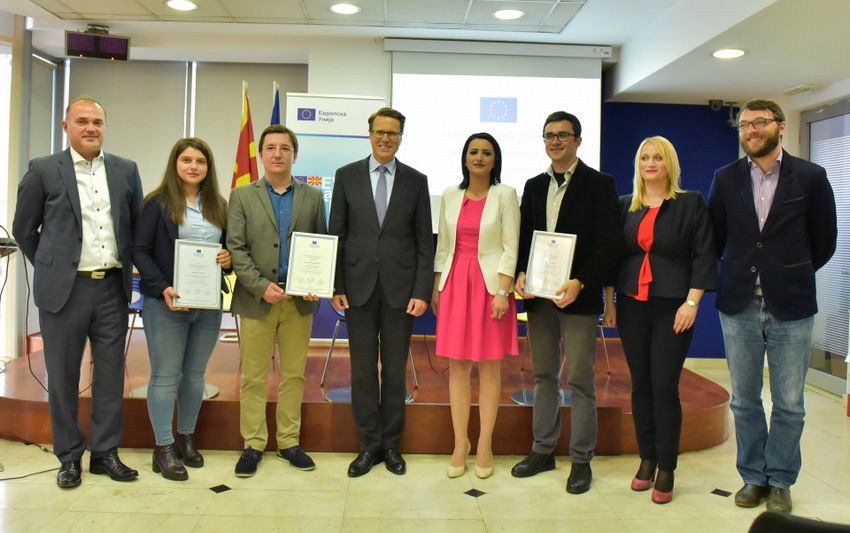 The journalist Aleksandar Dimitrievski won the first prize on this year’s contest “EU Award for Investigative Journalism" for the online data base and the series of texts regarding crop and livestock subsidies, which were published on the web page "Prizma".  The investigative story brings to the fore comprehensive and systematised data concerning the allocation of the 3% of the state Budget on the grounds of crop and livestock production subsidies. Furthermore, it analyses the potential connection between part of the subsidies beneficiaries and the executive branch of the government and the suspicious ownership structure of certain companies which have received subsidies.

Zoran Jovanoski won the second prize for the story Ashes of Death, which was featured on the broadcast "360 Stepeni" on Alsat-M Television. The story tackles an environmental disaster, which concurrently relates to the phenomenon of dramatically increased mortality in the area of Kicevo, resulting from the operation of the thermal power station Oslomej and the inappropriate treatment of the combusted carbon ashes.

Slavica Filipovska won the prize for the best story by young investigative journalist for the story Bulgarian Passport for "Pure" Macedonia, which was featured in the broadcast "360 Stepeni" on Alsat-M Television. The story, in an authentic and original manner, reveals how in an attempt to enter the EU member states as soon as possible, the citizens perceive the procedure for obtaining Bulgarian passport and citizenship as the way to achieve it.

The awards were handed by the Head of the Delegation of the European Union, H.E. Samuel Zbogar, who highlighted that being an investigative journalist all over the world is stressful, difficult and often dangerous. “Journalists face psychological and physical threats, they are taken to court for defamation, receive insults but also small salaries. In spite of all this, they are brave and stubbornly committed to doing their job. And we cannot do less than showing our admiration for them", underlined the Ambassador Zbogar. He added that disclosure of corruption and organised crime is maybe the most difficult part, since crime has its perfidy way to hide and distort the system that should actually protect society.

Among the 32 stories from 26 authors, all featured in printed, electronic and Internet media, the winning stories were assessed with highest marks by the jury composed of: Marina Tuneva, Arta Tahiri, Lirim Dulovi, Boris Georgievski and Fatmir Aliu.

Marina Tuneva, the chair of the jury, stated that despite the fact that the stories would not have an immediate effect, the tenacity itself with which the truth is expressed would be a great success for the journalists and the newsrooms. “At the same time, we encourage the editors to support the process of writing investigative pieces, especially when a journalist had discovered corruption related topics and issues that deserve to be treated thoroughly and extensively”, Tuneva said.

In view of the fact that the majority of the stories shortlisted were well researched and addressed exceptionally important issues of public concern, the jury gave the maximum number of awards. The winning story was awarded with 4000 euros, whereas the reward for second place and for the best investigative article by a young journalist was 3000 respectively.

The jury report is hereby attached.

The photo gallery of the awarding ceremony is available here.