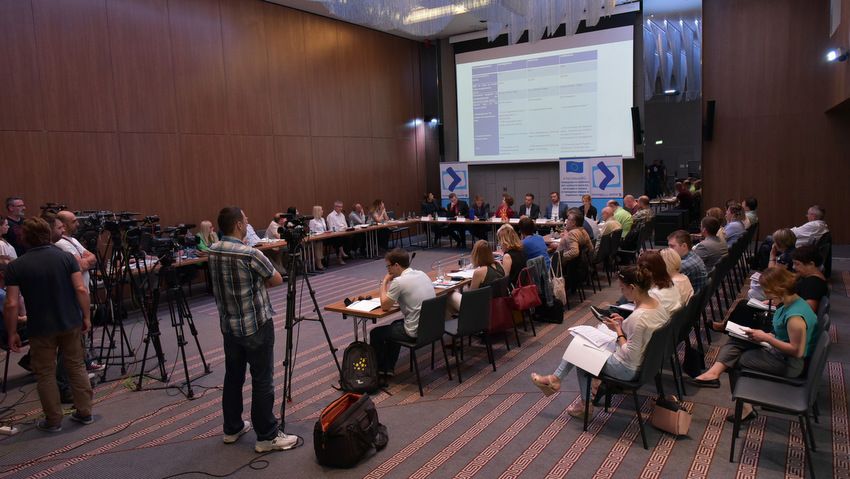 Unlike in Macedonia, where national commercial terrestrial TV stations are exclusively "home" owned, the most influential commercial media in Croatia and Slovenia are in the hands of international media groups such as the Central European Media Enterprises (CME) and RTL, which enables them greater independence from political and business centres of power. Neither company being an owner of the most influential TV stations in Macedonia is registered to deal in the media business as their core line of business. As opposed to that, the TV channels owned by the CME and RTL groups in Croatia and Slovenia pay particular attention to the development of their media business on various platforms to keep pace with the latest technological trends and demands of audiences.

These are some of the conclusions resulting from the analysis of the Macedonian Institute for Media "Ownership and financial models of the most influential TV channels in Macedonia, Croatia and Slovenia" presented at the conference "The future of national commercial TV channels: What is the formula to success?".

The event also hosted the presentation of the analysis "Programme diversity of the most influential TV channels in Macedonia, Croatia and Slovenia"", which resulted in the conclusion that most commercial terrestrial national TV channels in Macedonia are dominated by dull and unattractive programme containing numerous Turkish soap operas and Serbian entertainment shows with very little domestic production what is, moreover, of poor quality and non-competitive with the remaining media contents. On the other hand, in both Croatian and Slovenian TV channels prevail entertainment programmes and reality shows, as well as news editions which are among the ten most highly ranked TV contents in general according to their viewership ratings. When both countries were taken into consideration for comparison purposes in the survey, their most influential TV channels were assessed to invest heavily in their domestic production with said programmes being highly ranked on the viewership lists.

The event was opened by EU Ambassador Žbogar, who said that on relatively small media markets, the media business and regulators have specific challenges which "often open some room for influence". "This is why it is important to have transparency with the media ownership and financing. It is also important that the regulator should have the authority, capacity and mechanisms to protect its independence and professionalism," said the Ambassador. He also emphasized the role of the citizens organizations that "should speak freely and get involved in an open, inclusive and effective public discourse," as well as of the Council of Media Ethics in Macedonia, which should help and provide direction to all stakeholders in the media sphere and comply with the professional standards. "Cooperation of the media business aiming to ensure transparency of the decisions and autonomous self-correction is an important goal," added the Head of the EU Delegation.

The new Minister of Communications, Accountability and Transparency, Robert Popovski, also spoke at the conference who said that the crucial issue for him is that there should be no influence over the media and the media industry. ‘Neither the government nor the opposition should exert any influence. They should all be equally represented and the media should be equally open for the political entities, the civil society, etc.," said Minister Popovski.

At the first discussion session about the ownership and financing models of the most influential commercial national TV channels spoke the director of Kanal 5 TV, Ivan Mircevski, who is also the president of the Macedonian Media Association (MMA). He pointed to the state and the institutions as being the culprits for the distorted TV market and the unstable financial situation of the TV channels for having enabled the decrease in the criteria for obtaining licenses for national and local TV channels.

Ivan Lovreček, deputy-president of the Management of RTL, Croatia, addressed the work of RTL TV by indicating that the investment from international media groups has enabled the transfer of modern know-how, trends and standards from the media practice of the developed countries. On the other hand, the financial independence and stability, which are enabled by the international media groups, make the medium more resilient to any influences over its editorial policy.

"Commercial TV channels will show integrity, firm standing and all that it takes for a so-called political independence at the moment when they have sufficient funds to survive on the market," believes Milan F. Živković, former media policy adviser at the Ministry of Culture in Croatia. In his opinion, there is an ever more present trend of internet advertising at the expense of advertising in television. In wealthy countries such as the United Kingdom, the internet migration is already a matter of fact, whereas in countries of Central and East Europe that process is being run more slowly, added Živković.

As far as programme diversity is concerned of the most influential TV channels in the three countries, Atanas Kirovski, director and editor-in-chief of Telma TV, said that television not only has a commercial role, but also has a social responsibility when it comes to the programme it offers to the citizens. "We feel a social responsibility to show people what the Oscar winning films in 2016 were; what the winners of the Cannes and Venice film festivals were, etc.," says Kirovski. In his opinion, government advertising and disproportionate allotment of budget funds for advertising was the biggest problem faced by Telma TV on the media market in the past years.

Domestic production is something that no television can do without with audiences in Slovenia, as stated by Tomaž Perović, former news and sports director at POP TV and Planet TV. " Last year there was practically no evening without a commercial television airing at least one show from the local production," added Perović.

This is a first conference within the project "#ReForMediaMKD - Citizens, CSOs institutions and Institutions Reforming Media in Macedonia" implemented by MIM in cooperation with the Institute of Peace from Ljubljana, Slovenia and funded by the European Union.

The reports from both analyses, as well as the presentations of the guests from Croatia and Slovenia are available below.

The photo gallery of the event is available here.

Programme diversity of the most influential TV3.51 MB

Ownership and financial models of the most influential TV3.4 MB