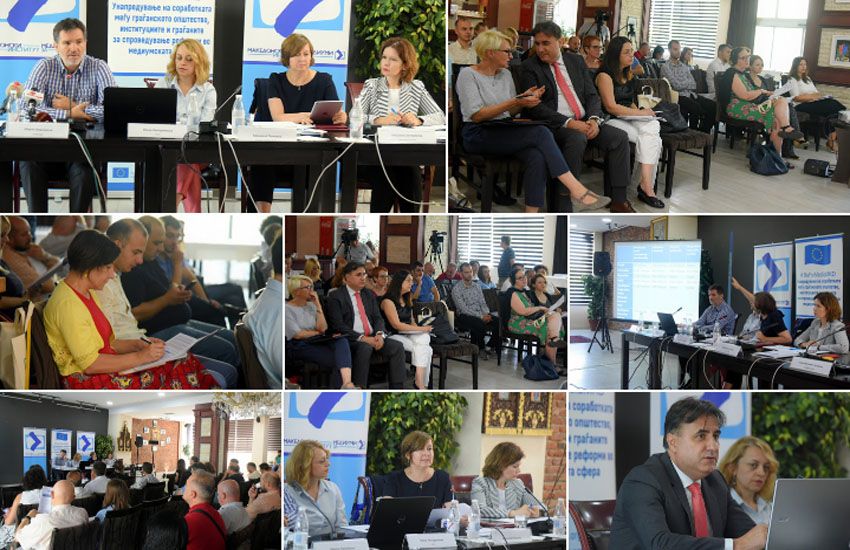 A need of state strategy for development of the media sphere

The need of wider institutional engagement in identifying the strategic goals of functioning and developing the media sphere, determination of short term and long term measures for support of the existence of regional, local and nonprofit media and the media of the small communities, as well as the need of introducing subsidies for different types of media and platforms which hardly exist on the market. These were some of the topics of the conference “Strategy for Development of Media Sector - the Needs, the Challenges, the Stakeholders”, organized by the MIM in cooperation with the Peace Institute from Ljubljana.

Many media owners and directors, journalists, representatives of the civil society sector, local and international institutions discussed about the future of audiovisual media industry and the strategic development of media sphere in Macedonia.

At the opening of the event, Sanja Frkovic - Gelevska, representative of the EU Delegation in Skopje addressed the participants. She stressed that freedom of expression and independent media are the one of the key EU values.

“They do not need to be only part of the legislation, but they also have to exist in the practice. This requires articulated and consistent behavior by all stakeholders - media owners, editors, journalists, regulatory bodies, legislators, political parties and citizens. The premise that initiates our thinking in policy creation, including in the media sector as well, must involve these values, taking in consideration the entire complexity of the context” - said Frkovic-Gelevska.

The publication composed of texts written by seven owners and directors of national and regional TV-channels was presented at the conference. The owners and directors presented their vision about the media industry and media business in the following years, as well as about their expectations from the state institutions and the regulatory body in regards to improvement of the working environment. They also tackled the question - is it possible to work freely on the media market without relations with the political and business centers of power, and presented their opinions on what public interest mean to them.

In regards to the strategic development of the media sphere, Brankica Petkovic from the Peace Institute - Ljubljana, stressed that several countries in the region - Croatia, Slovenia, Serbia and Montenegro, prepared media strategies under the jurisdiction of the Ministries of Culture.

“The process should be managed institutionally by involving representatives from the state institutions that are experts and have knowledge and experience in the sphere of media policy” - added Petkovic.

Zoran Trajcevski, the Director of the Agency of Audio and Audiovisual Media Services, noted that the strategy for the period 2018 – 2018 is being prepared and it will be focused on the work of the regulatory body. However, he stressed that in the past the Agency faced problems because the Law did not determine who should adopt and coordinate the implementation of the previous two strategies prepared by then Broadcasting Council. Trajcevski pointed out the need of précising who should adopt this strategic document, and according to him, it should be the Government or the Parliament.

Mladen Cadikovski, Editor in chief of TV 24 Vesti commented that bigger problem is the lack of quality programmes produced by the national media, due to which advertisers move to foreign channels mainly sport oriented, which are broadcasted in Macedonia and offer more attractive and interesting programmes to the viewers. There is enough space on the TV market, but also there is a need for its liberalization, as well as for offering programmes with better quality, he stressed.

The director of TV M - Ohrid, Irena Arnaudova discussed about the problems which regional and local TV channels face. She suggests that state institutions and the regulatory body should make detailed analysis on the situation and the conditions in which these media work. “However, resolving the chaos in the media sphere, first of all depends of the political will” - Arnaudova added.

The initiative of the Association of Print Media on introducing subsidies for support of print media was also discussed during the conference. Regarding this topic, the analysis “Review of the mechanisms for media subsiding and the journalism in European countries and the Macedonian experience“ was presented at the conference by its author Mirce Jovanovski. Brankica Petkovic shared experiences from the region and European countries where different mechanisms of direct and indirect subsidies for different types of media exist.

In that context, Lirim Dulovi, owner of the daily Koha and president of the Association of Print Media, informed the participants about the following requests of the Association: subsidizing the newspapers for half of the costs for printing and half of the costs for distribution; allocation of additional  20%  financial resources for the media of smaller ethnic communities; the enterprises in which the state is a shareholder to allocate part of the budget that will be used for marketing in the print media; full exemption from social, pension and health insurance contributions for newly employed in the print media in the first three years, and 50% release for the current employees for a period of three years.

Marina Kostova, editor for the portal SDK.mk, talked about the situation in the online media. She stressed that only few out of a hundred portals can be named as professional digital newsrooms. She considers that the possibility of commercial operation of serious portals is almost nonexistent and informed that their newsroom is dominantly financed by grants.

"The problem is that advertising agencies make no difference between portals that steal content and professional digital newsrooms that create content, so they buy out advertising space everywhere," - Kostova explains the problem that their newsroom is facing.

The discussions on the topic should continue in order efficient solutions to be found for improving the extremely difficult financial situation that most of the media face and defining the strategic goals and operational plans for development of the media business.

The conference was organized as part of the project “ReForMediaMKD”, implemented by MIM in partnership with Peace Institute from Slovenia. The project is supported by the European Union.

The photo gallery is available here.