Journalism torn between professional principles and the business

Media business and journalism, and the role of state institutions in protecting media integrity were the main topics of the forum "Media integrity and funding - regional experiences and domestic perspectives", organized by the Macedonian Institute for Media within the project "Southeast European Media Observatory".

Media experts from the country and the region, delivered speeches in the presence of media owners and editors, and representatives of media organizations, journalists' associations, as well as domestic and international institutions. 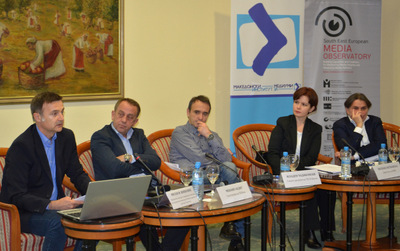 In the first part of the forum titled “Who will pay for journalism”, Mladen Chadikovski, editor in chief of TV24 News (TV24 Vesti), emphasized that professional journalistic standards neglect in the media is mostly due to the penetration of budget funds in the media, which successively contribute to the corruption of media owners, editors and journalists. According to Goran Mihajlovski, owner and editor in chief of the web platform „I want to say” (Sakam da kazam), if journalists are not offered good wages and good working conditions then independent journalism cannot be expected. The representative of the regional media, Mevaip Abdiu, owner of TV Koha Tetovo, said that the share of national broadcasters in the total profit of the television industry is constantly increasing, while local and regional media remain on the margin with serious financial problems.

Milan Zhivkovikj, a former advisor on media policy within the Ministry of Culture of Croatia, shared his experiences and alternative measures to support the media and journalists. In addition, he referred to some of the instruments of state support to the media in Croatia, such as: decreasing VAT for the media, establishing a fund for media pluralism and budgetary support to non-profit media outlets

Snezana Trpevska from the Institute of Communication Studies, Miroslava Milenovikj, member of the Anticorruption Council of Serbia, and Zoran Trajchevski, Director of the Agency for audio and audiovisual media services highlighted the role of state institutions in the protection of media integrity. According to Trpevska, the current media policy does not 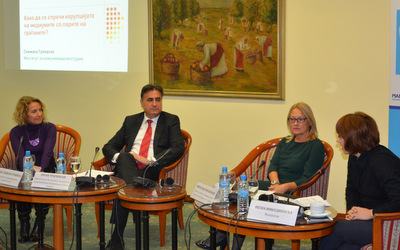 provide conditions for the existence of diverse, independent and autonomous media. She said that media ownership pluralism is only formally observed, while in practice, hidden ownership relations with the governing structures are observed. The representative of the Anticorruption Council of Serbia said that it is impossible to successfully combat corruption without independent media, as a government watchdog. She emphasized that their reports confirm the link between public money and the editorial policy of the media in Serbia. The director of AAVMS addressed the media legislation in Macedonia and the responsibilities of the Agency in the interest of ensuring media integrity.