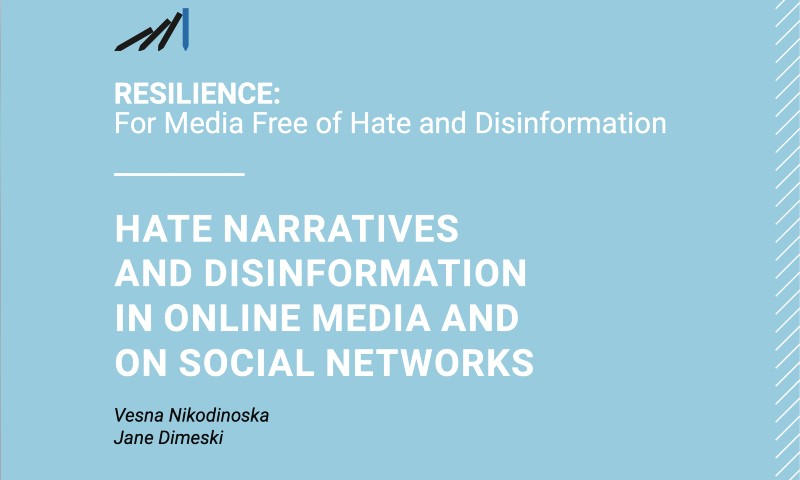 RESEARCH: Hate Narratives and Disinformation in Online Media and on Social Networks

The purpose of this research that focuses on online media and social networks was to identify patterns and examples of hate and disinformation narratives, examining actors and events that serve as the main generators of ideas and messages, common targets, dynamics of production and dissemination of narratives, and possible reactions or preventive actions to combat them.

The combination of the pandemic, early elections and religious gatherings during the first half of 2020 in N. Macedonia created fertile ground for the escalation of the information chaos, spread of disinformation and hate speech, especially online.

By analyzing different cases and events related to four target groups, the research identified hate and disinformation narratives appearing in online media and on social networks.

In the cases analyzed, migrants were presented as the ones subverting society’s cultural values, who could settle in the country and thus take advantage of the socio-economic system or spread Islam. This narrative was largely supported and misused by political parties.

Hate and disinformation narratives against political opponents have been triggered by strong nationalistic and identity issues constructed by centres of power and then perpetuated and reinforced by supporting media.

Narratives against female journalists contain derogatory language, frequently on a gender basis, as well as stereotyped views and perceptions of women’s role in society. Misogyny and sexism are present in the reporting of a few media and used for pressure and blackmail.

In relation to inter-ethnic and inter-faith issues, religious festivities during the lockdowns brought to the surface divisions and enmities among ordinary people on social networks and online media.

The elimination of hate speech and hate narratives from the public discourse requires coordinated efforts of different institutional and civil society actors, including the political elites which have a crucial role in the production and dissemination of such practices, the research concludes.

This publication was produced within  Resilience: Civil Society for Media Free of Hate and Disinformation, a regional project financially supported by the European Union and implemented in the Western Balkans and Turkey by a consortium of media development organizations led by SEENPM. It is part of a series of publications on the same general topic focused on hate narratives researched in Albania, Bosnia and Herzegovina, Kosovo, Montenegro, N. Macedonia, Serbia and Turkey (all publications are available on the SEENPM website).