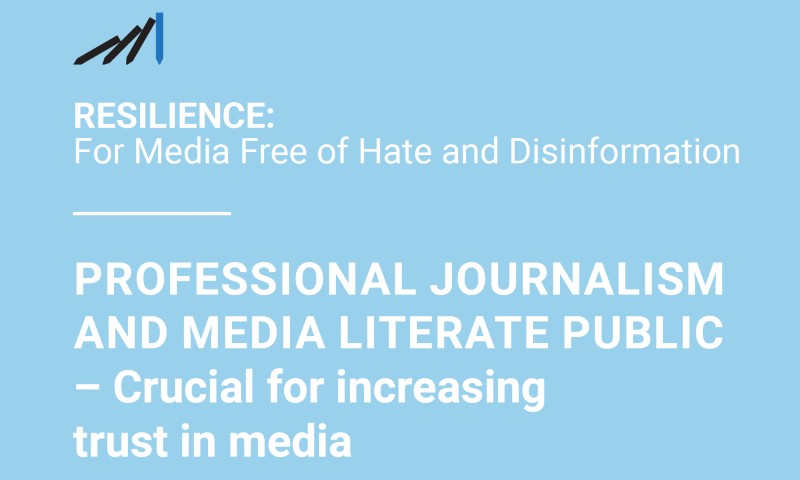 Complementing research on hate and propaganda models of media and communication and hate narratives conducted earlier as part of SEENPM’s Resilience project, this report analyses media trust and media gender issues in N. Macedonia and offers a set of policy recommendations.

The study makes the following conclusions:

At the end of the series of three research studies conducted within the “Resilience – For Media Free of Hate and Disinformation” project, we can conclude that increased use of online media and social networks as a source of news and information by citizens in N. Macedonia calls for additional accountability mechanisms and greater responsibility of the media and the networks, particularly to restrict hate, propaganda and disinformation. In addition to the existing mechanisms of media self-regulation, we need a regulatory or self-regulatory framework and commitment from political and other centres of power to prevent the use of the media for the promotion of political agendas based on propaganda, disinformation and hateful narratives. On the other hand, we need additional effort from the education sector, civil society and the media to empower citizens of all generations for critical analysis of media content and the ability to recognize and value credible media, refusing propaganda and manipulation. The question of how to restore trust in the media therefore depends on various actors in society on both sides of the information flow – on the side of production and on the side of receiving and sharing news and information. In order to counter disinformation, hate and propaganda in the media and public communication in the country, a holistic approach is needed that will be based on the role of all actors that participate in the public sphere, assigning the responsibility to each of them based on their roles and power.

This publication was produced within Resilience: Civil Society for Media Free of Hate and Disinformation, a regional project financially supported by the European Union and implemented in the Western Balkans and Turkey by a consortium of media development organizations led by SEENPM. It is part of a series of publications on media trust and gender issues based on research conducted in Albania, Bosnia and Herzegovina, Kosovo, Montenegro, N. Macedonia, Serbia and Turkey (all publications are available on the SEENPM website).