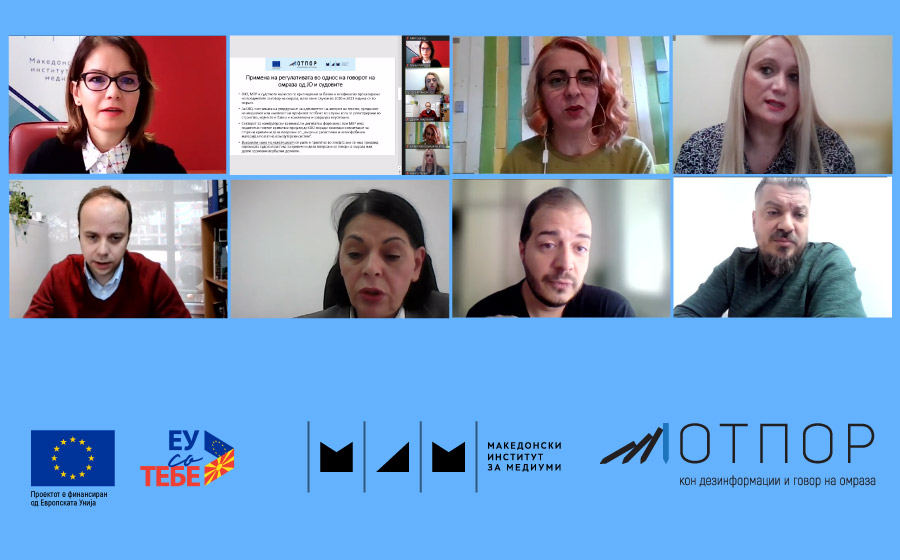 Education, proactivity and consistent implementation of the (self)regulatory mechanisms for successful fighting disinformation and hate speech

Improving court practice and strengthening media self-regulation are key factors to fighting hate speech and disinformation in the public communication. This is one of the conclusions from the panel discussion “Effectiveness of the Legal and Self-Regulatory Mechanisms in Fighting Hate Speech and Disinformation in North Macedonia”, organised by the Macedonian Institute for Media (MIM).

Speakers at the panel discussion were representatives from regulatory and self-regulatory bodies, as well as members of the media community. They spoke about the current situation with hate speech and disinformation in the public discourse, particularly considering the trends that are set by the new media and social networks.

Opening the discussion, MIM presented the analysis "Regulatory and Self-Regulatory Framework Against Hate Speech and Disinformation in the Republic of North Macedonia” which presents a factsheet on the basic legal and self-regulatory mechanisms regarding these issues.

Emilija Petreska-Kamenjarova from the Agency for Audio and Audio-Visual Media Services, in her speech pointed that the regulatory body always acts against cases of hate speech in media in accordance with the rules defined in the Guidelines for Monitoring Hate Speech which transpose the practice of the European Court of Human Rights. “When you need to establish that particular media outlet is responsible for disseminating or supporting hate speech, you should take a measure to limit the freedom of expression and that has to be exceptionally well founded and evidence based decision. The initial step is to establish whether there is hate speech, because not everything we dislike in the public discourse is hate speech” said Petreska-Kamenjarova.

Media are responsible for regular review and prompt removal of user comments published under the journalistic content on the web pages or social networks, which contain hate speech and have the potential to cause damaging consequences in the society, considers Marina Tuneva, director of the Council on Media Ethics. “In no case should media allow to be misused and serve as tools for disseminating hate, calling for individuals to unite for radical actions and acts that disturb public peace and order in the society and other actions”, stated Tuneva.

In accordance with Article 10 from the Law on Prevention and Protection against Discrimination, the Commission treats hate speech as harassment, which has the aim to damage the dignity and integrity of the person, stated Vesna Bendevska, member and until recently president of the Commission. “The Commission so far has investigated 30 cases which pertain to harassing speech, that has always been based on some of the discriminatory grounds laid down in the Law” said Bendevska. She added that increased number of cases of hate speech have been noted during certain societal events, such as the Pride Parade, or during electoral campaigns, when hate speech targets the political beliefs.

Dragan Sekulovski, Executive Director of the Association of Journalists of Macedonia (AJM) underlined that although the country was lagging behind in court practice regarding hate speech, however, the recent first verdict for hate speech on Facebook, reached in favour of the AJM, is sign of hope that steadily there will be court practice for such deeds.  “Last year the AJM in talks with the responsible judicial bodies, as well as with the Ministry of Justice, requested the establishment of separate unit within the Basic Public Prosecutor’s Office, composed of prosecutors that would be trained and possess the necessary expertise for deeds related to hate speech, as it is a matter of quite specific cases, particularly when it comes to verbal acts committed online” added Sekulovski.

This panel discussion was organized within Resilience: Civil Society for Media Free of Hate and Disinformation, a regional project financially supported by the European Union and implemented in the Western Balkans and Turkey by a consortium of media development organizations led by SEENPM. It is part of a series of publications on the same general topic researched in Albania, Bosnia and Herzegovina, Kosovo, Montenegro, North Macedonia, Serbia and Turkey (all publications are available on the SEENPM website).