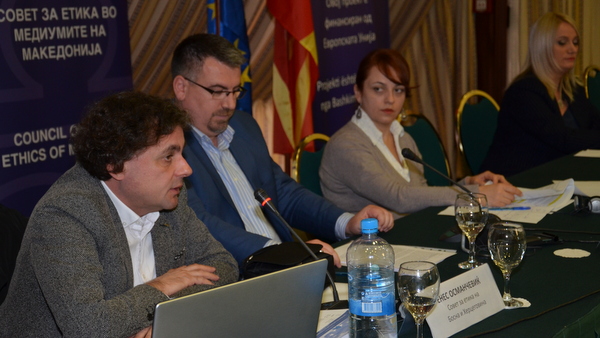 National conference: Journalism ethics and media values in a challenging environment and in times of elections

Ethical reporting and perspectives of media self-regulation, (non) balance in journalistic reporting, online media ethics, media coverage of the elections and the role of the media in the electoral process were the main topics of the conference "Journalism Ethics and media values in a challenging environment and in times of elections“, organized by the Macedonian Institute for Media and the Council of Media Ethics, in cooperation with UNESCO and the Delegation of the European Union.

The event was attended by representatives of electronic, print and online media, civil society organizations from the media sector, regulatory bodies, government institutions and international organizations.

The President of the Complaints Commission of the Council of Media Ethics, Mirce Adamcevski focused on media self-regulation and its prospects in the future through the prism of the current work of the Council. "Nearly a third out of 50 complaints are related to violated human rights, hate speech, incitement to violence and discrimination on various grounds. There are complaints about publication of unverified information without consulting two or more sources, breach of privacy right, mingling facts and opinions, news and comments "- noted Adamcevski.

The most typical violations of professional standards in the media and (non)balanced journalistic reporting were in the focus of the presentation of Sefer Tahiri, member of the Complaints Commission. "Many media outlets do not take in consideration that the journalists should strive to ensure a balance between fair competition and professional solidarity. In fact, neither journalists nor editors should allow themselves to counter their colleagues through their own media"- said Tahiri.

Enes Osmanchevic, representative of the Press Council and Internet media in Bosnia and Herzegovina highlighted the key challenges in the defense of professional and ethical journalism on the Internet and the role of self-regulatory mechanisms. According to him the hate speech is the biggest problem in the online media in BiH and in the region. Unlike the 90s, when politicians and religious dignitaries were most common promoters of hate speech, today, it is the users of the Internet, among which well-known entertainers, athletes, actors can be found.

The previous experiences and findings from the monitoring of media coverage during the elections, and the influence of advertisers on the content in the media during the election process were further topics on the conference’ agenda. Martin Huckerby, an experienced journalist and editor in leading British media, highlighted the key duties of the media during elections. "If the elections belong to the citizens then the media should make an additional effort in terms of representing the interests of the voters. They can do it in many ways, through surveys, debates, or through various online forms to promote the needs and opinions of the citizens "- emphasized Huckerby.

The nationional conference is the final activity of the project "Media Accountability in South East Europe", which was implemented by UNESCO and the Macedonian Institute for Media as a regional partner, and with financial support of the European Union.